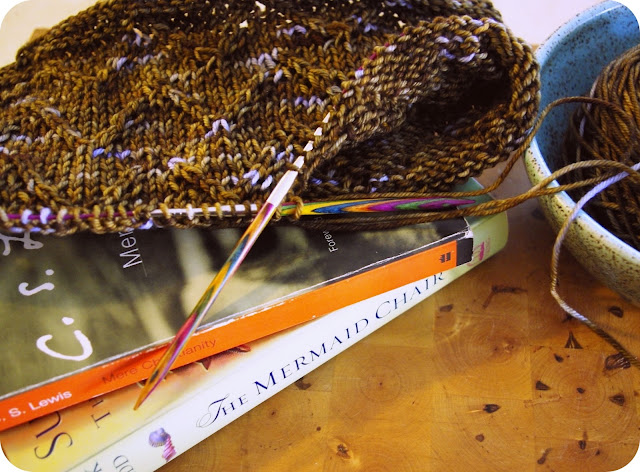 I've put aside my sock for a few days to work on the "Downton Cowl"-something that I signed up for as a Downton Abbey knit along over at Luvin The Mommyhood.
I messed up the lace pattern in the second row and had to rip back a few rows and start over. I'm terrible at counting while the kids are trying to talk to me, or if there are any shenanigans going on around our house. (It's safe to say that there usually are.)
Once I got it ripped back and got the first set of pattern work done, I found it much easier to figure out where I was in the pattern if I was interrupted. And not near as much counting now because I can just see where I am, what I've just done and what needs done next without looking at the pattern chart.

This is my first project using Madelinetosh wool. I'm not sure that there's any going back after this, knitting with Madelinetosh is pure luxury!
I'm a bit confused because the woman who owns the yarn store where I bought this wool told me that i'm knitting wrong and that my stitches are going to come out twisted. (Because I knit continental, she said I should be knitting through the back loops?)
It bothered me a bit-and it took a bit of motivation to start again. I didn't want to continue if I was doing it *wrong*...but at the same time what i'm doing feels right, and ends up looking the way it's supposed to.

I've watched quite a few knitting videos on youtube and I don't think doing anything different than what they're doing. And my stitches aren't twisted either, so I'm not really sure what she was trying to say.
Once I got over that hump, I'm  back to loving knitting. There were a few days though where I just left it in it's bowl afraid I was somehow going to mess things up.

I've been reading "The Mermaid's Chair"...it's been sitting in my "to read" pile for a while now and decided it was time. To be honest, I wasn't a big fan of the story line (from what I know by reading the jacket anyway). Stories about unfaithful spouses-or stories that excuse that behavior, rather, tend to bother me.
I do like Sue Monk Kidd already though, so I decided to give the book a chance.

Also, re-reading "Mere Christianity" by C.S. Lewis. It's been a while since I've read it and found it floating in a stack of my Dad's books.
It might take me a little while to get two books read with the little reading time I've got...but at least I wont' be short on reading material!

P.S...Don't forget! The Lexicon project starts tomorrow!! Check back here or over at House Full of Jays for the project word of the week!
Posted by Corrabelle at 12:33 PM

Email ThisBlogThis!Share to TwitterShare to FacebookShare to Pinterest
Labels: knitting, reading, yarn along