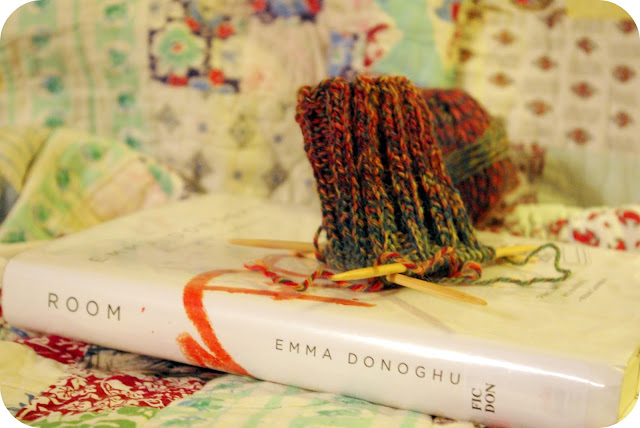 Joining Ginny this week again in another Yarn Along...

I'm *still* working on the scarf for Dad-he'll probably, realistically, get it next Christmas.
I haven't had a ton of knitting time over the last few weeks, but I do bring the thing with me everywhere still. I plan on bringing it on a wee road trip that we have planned for tomorrow.

I've also started a pair of socks. I'm testing a pattern for my sister's awesome Mother-in-Law, who is somewhat of a knitting genius. The woman can crank out finished knitted socks, hats, scarves, sweaters faster than I can cast on. Seriously!

I told her that I'd like to try socks though, so she gave me a pattern that she had recently written. So far, i'm doing okay. However, I've only done the easy part-the ankle! I'm a little nervous about the heel turn, but the pattern seems to be written in a way that I *think* i'll understand.

As for my reading goes, I've just finished "Water for Elephants" which was one of those books that just felt like home.

Maybe  because it was narrated by a man who reminded me a lot of my great grandfather in the way that he spoke (And apparently, my Great Grandfather actually worked for a travelling circus/carnival as a teen...this is recent news which I plan to dig into a little deeper...)

I really wanted to read this book though before seeing the movie. I've heard nothing but good things about the film version, but you know how it is, the book is always better!

Having not seen the movie at all  yet, I can't say which is best. I did find myself laughing out loud though at many events throughout the story. I think I would have enjoyed this even if I had already seen the movie.

I've just started reading "Room", which is growing on me slightly. The book is narrated by a child, so It's hard to take it seriously because at times, you can tell that it really is the author  *trying* to sound like a child, but missing the mark. I'm trying to see beyond that though and just take in the rest of the story...which is, in fact, incredible, and haunting.

It's one of those books where the writing style doesn't really grab me, but the story does, so i'll continue.

Do you ever force yourself through the finish of a book simply because you feel you need to hear the story, regardless of the connection you have with the style of writing?
Posted by Corrabelle at 2:09 AM