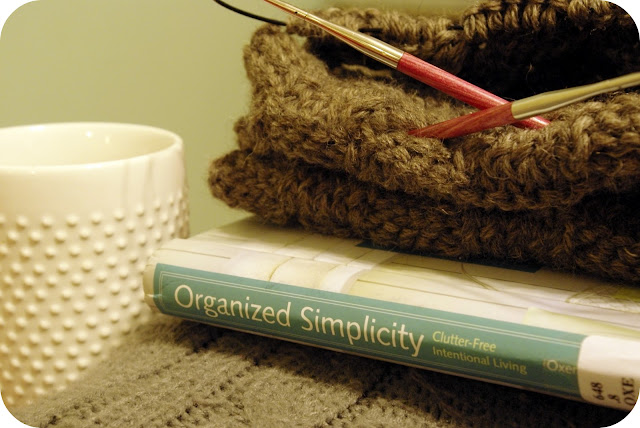 This week I managed to get quite a few rows in on my Dad's scarf that I've been working on for well over a month. (More than that, if  you count before I frogged it, 3 times...)


It's coming along nicely, and while I don't think it will be finished in time for him to wear this winter, I'm sure he'll appreciate it next winter. The season is slipping away quickly, and I'm more than excited for spring. It is too bad though that I didn't get it finished for him to wear sooner.


I used to be able to knit and hold or nurse Lotte at the same time, but now she attacks my yarn like a kitten, which is incredibly adorable, but obviously doesn't make things very easy! So my knitting time has been cut down a bit, I'm afraid.


I finished reading "Room"...I pushed through, despite wanting to call it quits. As I mentioned in a previous post, it was hard to read at times because it was being narrated by a child, in the present. And while some of it sounded real, a lot of it sounded like an adult pretending to be a child.


There were a serious lack of pronouns and conjunctions in his speaking that drove me to near insanity That, and his personification of many of the objects in his surroundings.


I suppose some children do think like that, but this child was supposed to be rather intelligent, despite being extremely sheltered from the outside world. He was supposed to have had excellent spelling skills, but lacking in the social...and maybe this was a way to play that up. I don't know.
Regardless, I muscled through it just to see what happened. The story itself is incredible, it was just the narrator that made me want to throw in the towel.


I've started in on "organized simplicity" which seems pretty good. I like that (so far) it's talking about organizing life in general, and simplifying our lives to allot more time for what really matters-not just our clutter and housework.

I do find it ironic though that earlier today the book was sitting on a heap of unfolded laundry, like a big fat failure. I've been trying to fold the same basket of laundry all day long. I suppose I should get on that now, shouldn't I?

I apologize for the weird spacing in this post-blogger is being a royal pain with that right now.
P.S: Happy Leap Day
Posted by Corrabelle at 1:26 AM