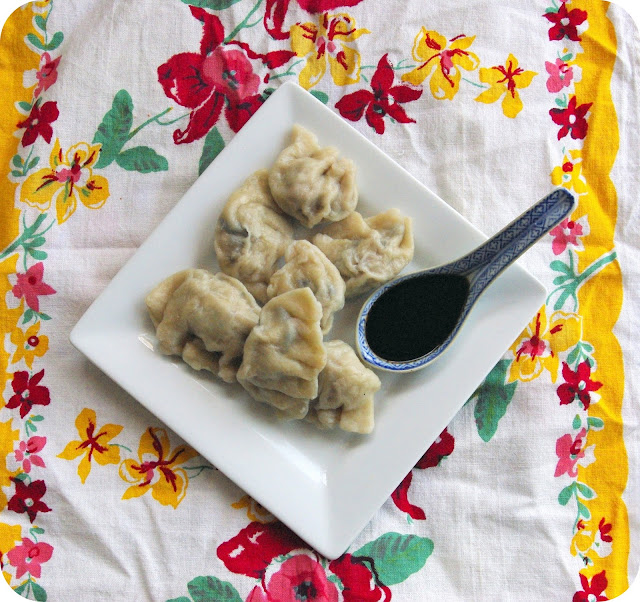 Once upon a time when I was quite young, my parents were shopping in an Asian market. They ran into a very friendly Cantonese couple who explained how to make some foods that my parents were curious about-and then invited our family over to watch and learn how to make dumplings.
At least this is how I *think* we met them. I need to check and verify that-we were always meeting new people at the time and the majority of them were Asian...so I could be confused.

Regardless, by some happening, we were invited to this couple's home for dumplings.
The woman's mother lived with them as well, so when we arrived, they had quite an assembly line going to make these dumplings.
One person would roll the dough, one person would fill, and the next person would pinch the dumplings shut and drop them into boiling water.
I don't know exactly how many dumplings were made that night, but I know my sister and I left with our tiny tummies bursting. I think that was also the night that I declared my life long love for chinkiang vinegar, a delicious, dark, thick and malty vinegar, which is what they had used as the dipping sauce.

They sent us home with the recipe and they've been a family favorite ever since.
They're easier than ever to make now that we can buy the wrappers at the asian market, already rolled and cut. But sometimes it's fun to make the dough completely from scratch, and I think that they do taste better. It's up to you whether or not you want to buy or make the wrappers.

The real fun in these is that you can make these filled with just about whatever you want. Play around and experiment! I've even had these with tofu or textured vegetable protein instead of meat and they were delicious.

Here is the traditional recipe though-you can leave out anything you don't like or don't have.

For the filling, you will need...

Mix the filling until very well blended and then set aside.

Put the flour into a large bowl, and add the water in small amounts at a time, while mixing with a fork or chop stick.
You want the dough to be a little bit sticky when you're done.
Next, roll the dough into 1.5 inch logs (like a play-dough snake) and cut into discs. You can dust your work surface with a little bit of flour if you have a hard time with the dough sticking.

Next, take the discs and roll them into flat circles. Try to keep the edges thin, but the middle slightly thicker. They'll hold up better when cooking this way.
At this point, if you're making a lot, or making these ahead for a later meal, you might want to line a platter or baking sheet with some parchment paper and sprinkle with some corn starch to keep them from sticking to the tray as they sit.
You can put a whole tray into the freezer and once frozen, drop into a resealable bag and freeze until you want to use them. If you do this, cook them from frozen state, do not thaw.
I usually roll out about 5 wrappers at a time, fill them and then do 5 more.
Keep your extra dough covered with some plastic wrap so that it doesn't dry out as you work. 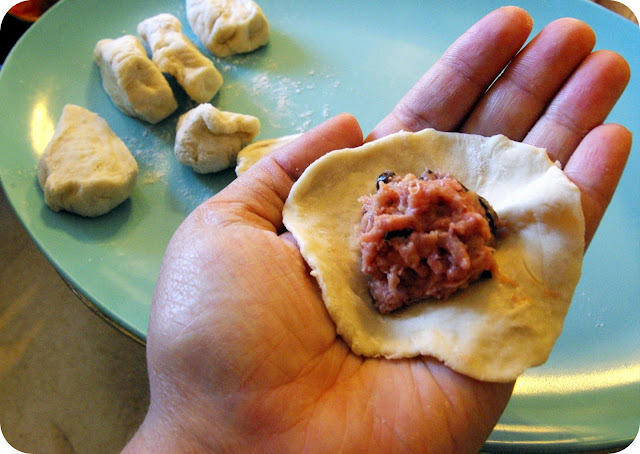 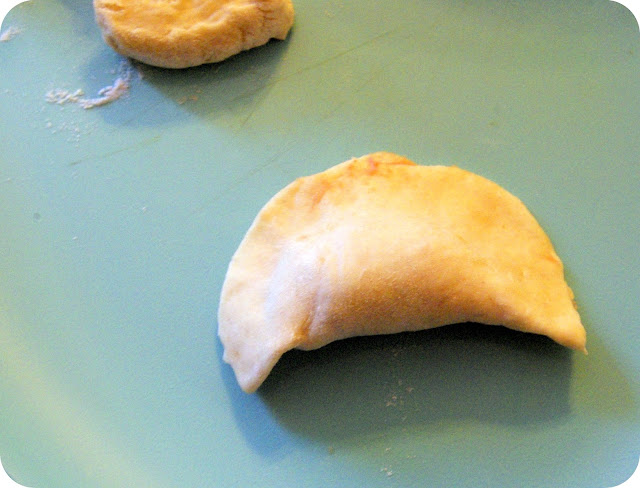 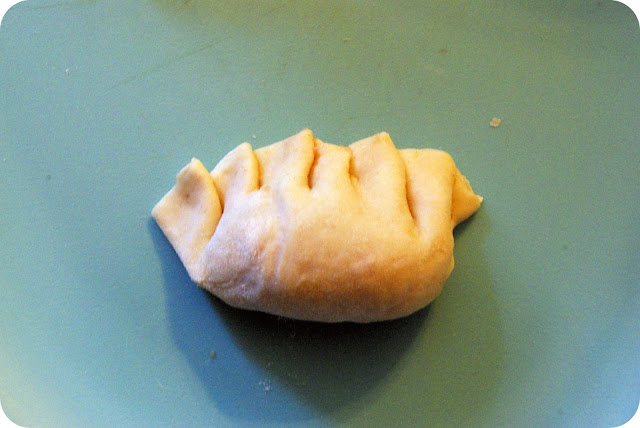 Once your wrapper is rolled, drop about a round teaspoon's worth of filling in the centre.
Fold up your wrapper into a half moon/semi-circle, and pinch shut. Then make some simple pleats/folds and pinch again to ensure it doesn't fall open during boiling.

Bring some salted water to a boil (not a super hard boil, but a low boil) and drop your dumplings in one at a time, giving each one a couple of seconds before dropping the next. This will keep them from sticking to eachother. At first they will sink, but will start to float to the top when they're almost done.
Boil for about 4 minutes.
Remove with a slotted spoon and place onto a lightly oiled platter or plate. Serve with a dipping sauce of your choice. My favorite is chinkiang vinegar, but other sauces like a homemade peanut/rice vinegar/sriracha sauce work really well too. 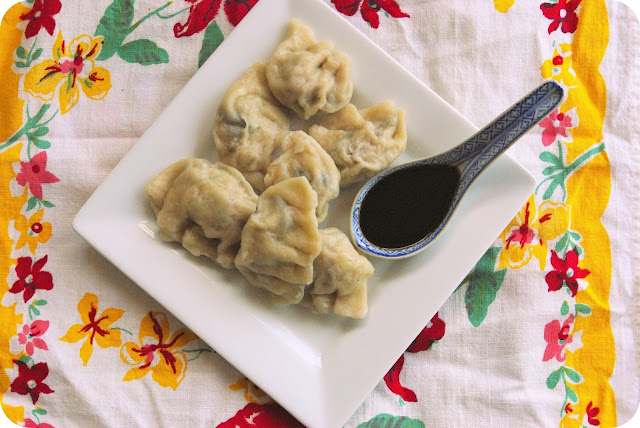 P.S. I've read about the origin of the Chinese dumpling and have found a multitude of stories claiming to be the original.  There are even dumpling festivals to celebrate some of the history. The stories vary widely as far as details go, but all come down to, basically, "somebody was hungry, and a hero invented these simple and nutritious little dumplings as a way to feed the masses quickly." (sometimes an army, sometimes a whole province of poor farmers...) In our case, a large extended family with a lot of kids. Works for me!