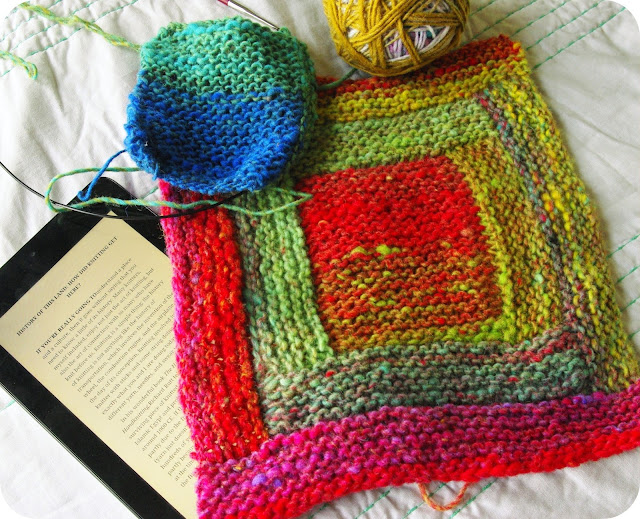 I can't hardly believe it, but I have no projects on the needles right now other than this. I've recently finished a little sweater, but I forgot to photograph it so i'll save it for next week.

A little while ago I started the Noro Log Cabin Blanket. It's just a simple square by square project that is eventually all picked up and formed into one big blanket.  Several of us at our Knitting group decided to make these together as a knit along, just for fun.
One of my friends has already cranked out an entire blanket and is on to her second! And she's giving the first one away for a wedding present. We've all told her that she should just give them the token salad bowl or crockpot (I mean, after all, who else but a knitter would truly appreciate an entire blanket made of noro?), but she won't listen to us.

This is a fun, simple knit and I have no deadline so i'm enjoying this just as an "in between" project. I've also really appreciated this because we're in the middle of an intense heat wave and  these squares aren't big heavy to rest on my lap as I knit, and they're pretty forgiving when my iced tea glass makes condensation all over them as I knit. I may have even used them for coasters now and then.

The only hard part will be finding 20 different colourways of noro, which is what the pattern calls for.
I suppose you could repeat a few, but that wouldn't be as much fun, would it? Now I have an even greater excuse to peruse every yarn store I happen to find. Oh Drat.

My Reading as been light this week. I've set aside "The Beauty of Humanity Movement" for some of the well loved Yarn Harlot's humour in "Stephanie Pearl Mcphee Casts Off". I've read her other books, but I think I'm enjoying this one the most out of all of them. Maybe it's because I've been knitting longer and now I "get it" more...but i'm not sure. I really do think this book is golden. Who would have thought that there could be so much potential humour from something as simple as Knitting?